60 YEAR OLD MESSAGE BOTTLE FOUND ON BRITISH BEACH INSTEAD OF THE U.S. 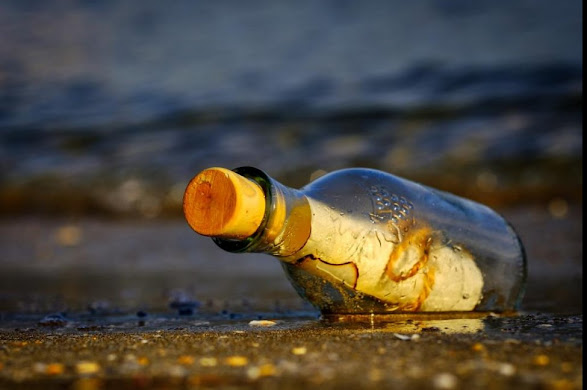 A pair of friends skipping stones at the Hove beach, Southern England soon made a shocking discovery of their life after they found a message bottle on the opposite side of England 60 years later, Indiana Tarrant 21, and Luca Gamberini 21, were both in great shock after their discovery, the fear of getting a hold of the bottle gripped them as they both shiver and contemplated whether to open it up or not, the bottle looked empty but the more they got closer the more they saw its got something in it, the curiosity to read what was in it also was part of the feeling, after a long while of deep thoughts and long steer at the bottle they eventually summoned up the courage to open up the bottle.

The letter was dated Aug. 7, 1961, and it was signed by Bobby Deseuges and Mates,

The letter apparently meant to be discovered in the United States, reads: "Dear you Yanks,

"How's life across the Pond? Threw this from the Pleasure Beach in Blackpool, U.K. Suppose I should say cheers for the help in the war. Roy Orbison is starting to kick off here and everything's seeming to get pretty groovy.

"I wonder what it's looking like on your side. Never been to America but I'd love to put on a Stetson and ride on horseback. Hope this message finds somebody well."

Indiana said the letter did not contain any contact information, so he and Gamberini attempted to find information about the sender online. They said they were unable to find any trace of a Bobby Doseuegs.

The men said they are now hoping press coverage of the message will lead to a clue about the sender.