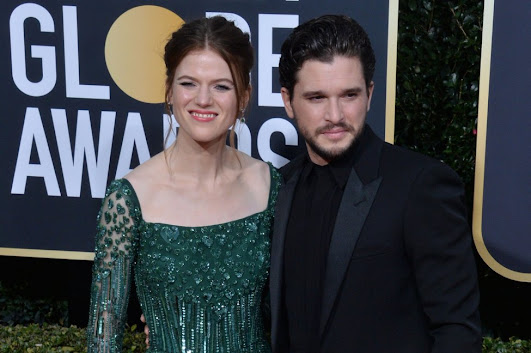 The joy of a new infant filled the home of the popular Game of Thrones couple, Kit Harrington, Rose Leslie, both of age 34, the happy moment was captured when the lovebirds were spotted with the newborn during an outing on Tuesday in London.

The couple held hands smiling while Leslie carried her son in a baby carrier on her chest, the couple who got married at a castle in Scotland in June 2018 was said to have met on the set of Game of Thrones which ended May 2019 after 8 seasons on HBO.

In an interview with Make Magazine, Leslie said she and Harington were spending time at their new home in the English countryside.

"What a glorious thing to be able to run to the countryside and recoup," the actress said. "It's a great privilege to be surrounded by greenery, birdsong and hedgerows, and our delightful neighbors. It's so peaceful."

"It's incredibly old," she added of the house. "I do love to think about the house and all the people who have lived there. Were they happy, how did they live? All the families passing under those ancient beams."

Harington said in an interview with news.com.au in 2017 that meeting Leslie was the "greatest gift" of his time on Game of Thrones.

The report also has it that the lovebirds will separately be featuring in an upcoming movie, Harington will play Dane Whitman, AKA Black Knight in a Marvel film Eternals, while Leslie will star with Keneth Branagh in an adaptation of Death on the Nile.