KANSAS ARCHBISHOP SAYS BIDEN IS NOT WORTHY TO BE CALLED A DEVOUT CATHOLIC.

Archbishop Joseph Naumann of Kansas City, Kansas, says that President Joe Biden is not a truly “devout” Catholic because of his stance on abortion rights.

“The president should stop defining himself as a devout Catholic, and acknowledge that his view on abortion is contrary to Catholic moral teaching,” Naumann told The Catholic World Report in an interview Saturday.

He accused the president of “usurping the role of the bishops and confusing people.” Catholic bishops have a responsibility to “correct” Biden when the president describes himself as devout, the archbishop said.

“Although people have given this president power and authority, he cannot define what it is to be a Catholic and what Catholic moral teaching is,” Naumann said.

The archbishop also commended a Catholic priest in South Carolina for “following his conscience” in refusing to offer Biden Communion in 2019. The Roman Catholic Church considers the Eucharist to be the “summit and source” of Christian life, which makes denying this rite a significant gesture of condemnation. 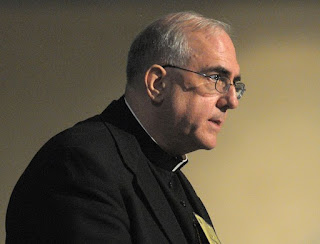 Naumann suggested that Biden, a lifelong Catholic, and weekly churchgoer, shouldn’t come forward during Mass to receive Communion because his stance on abortion is a “serious evil.”

“When Catholics receive the Eucharist, they are acknowledging the Real Presence of Jesus, and also believe in the teachings of the Church. President Biden doesn’t believe in the Church’s teachings on the Sanctity of Human Life, and he should not put the priest in the situation where he has to decide whether or not to allow him to receive the Eucharist,” the archbishop said. “He should know that after 78 years as a Catholic.”

John Gehring, Catholic program director at the progressive advocacy group Faith in Public Life, called Naumann’s words a form of “theological malpractice” that does nothing to change Catholics’ views on this issue.

“There is an effective way to express sincere disagreement with President Biden on this issue without burning bridges with the White House and alienating millions of Catholics who are proud of how the president has demonstrated that his faith is core to his character and his commitment to the common good,” Gehring told HuffPost.

The U.S. Conference of Catholic Bishops has flagged abortion as a “preeminent” priority for Catholic voters. Because he chairs the Committee on Pro-Life Activities, a group of bishops seeking to curb access to the procedure, Naumann’s words carry particular weight.

At the same time, the prelate in charge of the Catholic diocese of Washington, D.C., has said that he won’t deny Communion to Biden. Cardinal Wilton Gregory has suggested that taking such a harsh stance would be akin to going “to the table with a gun.”

Naumann and Gregory’s different approaches showcase just how deeply divided American Catholic bishops are on how to handle the progressive faith of the country’s second Catholic president. Some prelates, like Naumann, have taken a combative stance toward Biden, focusing on culture war issues such as abortion. Other bishops, including many appointed by Pope Francis, have emphasized dialogue and working jointly on moral issues where there is common ground ― such as welcoming refugees.

After the 2020 election, the U.S. Conference of Catholic Bishops formed a special group to discuss how to deal with Biden. That group, now disbanded, proposed a report on the Eucharist and the need for Catholics’ public witness, according to the National Catholic Reporter. 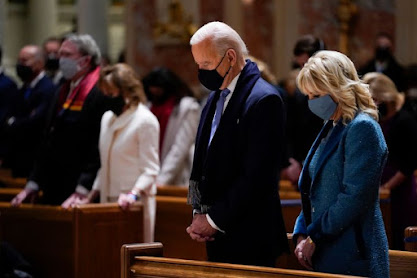 Jamie Manson, president of the abortion-rights group Catholics for Choice, told HuffPost that she sees these disagreements between American bishops in a positive light since it has historically been rare for bishops to publicly contradict each other.
“It’s actually a hopeful sign that we are not an absolutist faith,” she said. “That we are honoring the Catholic intellectual tradition and honoring the Catholic understanding of conscience.”
Biden has said that while he personally accepts church doctrine about when life begins, he doesn’t want to impose those views on others.
He opposed federal funding for abortion in the past but started towing the party line in 2019 when he became a front-runner for the Democratic presidential nomination. Since becoming president, Biden has taken steps to increase access to reproductive health care, including rescinding a Trump policy that blocked taxpayer funding for global health nonprofits that provide abortions or abortion counseling.
Most Catholic adults in the U.S. ignore church teaching about contraception, and a majority say abortion should be legal in all or most cases.
The Catholics in the pews see abortion as a morally nuanced issue, while the bishops “just want to stigmatize it,” Manson said. Catholics for Choice research suggests that Catholics across the political spectrum disagree with efforts to deny Communion and other sacraments to those who support access to legal abortion.
“Jesus required no orthodoxy tests when he welcomed people to his table,” Manson said.