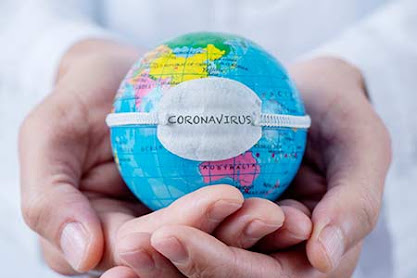 All nations of the earth trembles at the sound of your name, all human run at your presence, you put all strong and mighty men in fear whenever you are in their neighborhood, the old, experienced and dead haven't experienced you during their early days or lifetime, the innocent child is forced to leave this lovely habitat of his, you move like the wind and most times faster than the speed of light, what then are you I keep asking myself, where are you from? what did we do to deserve this from you? how long have you been hiding before you eventually decided to show up your ugly face, power, and powerful men has no meaning to you, you do whatsoever you wish and want with them, you make all inventions and knowledge of man meaningless, oh, what are you?

The experienced in different fields have been in search of who or what you are, nations cry and mourn whenever you set foot on their land, sensitization has now been spread all over the nukes and cranes of the world, only a few of the nations haven't experienced you, I'm guessing they think of you has merciful all because you haven't visited them yet you the unexpected visitor that changes and turns all things upside down. I can't stop wondering how to or will we put our forces together and fight this unknown and unseen killer.

The most powerful nation on the earth has been working tirelessly to put an end to you, amidst all they put the blame on the Asian giant nation saying they brought out the killer, they originated the killer, when I decided to sit and think deep into the accusations I found out the unknown killer started from there, the Asian giant were the ones affected at first, so I can conclude it originates from there while trying to solve the puzzle I get stuck again, what did they do to bring you out? how on earth were you consulted? I read stories and journals saying you came out through a monkey, others mentioned it was through a bat, can someone just wake me up from this nightmare, man now sleeps in fear and uses all safety measures to stop your spread and means of entering into their countries or states. But wait a minute, when as it becomes a crime when I sneeze, whenever I sneeze everyone in that environment tend to turn their eyes at me, just as if I am one of your carriers, I get afraid to cough as well in public, when will all this stop, can we just end this, at any slight headaches I am always afraid and praying you aren't the one in my head, you are so disrespectful and government policies and regulations don't disturb you from doing your work, take for instance we say you are targeted at some cruel wicked people of the world this would have been a relieve, but that isn't the case, you aren't after the oppressors of man but rather you are after everyone no matter the age, race, color, and background.

To crown all up some corrupt individuals and government make use of your presence as an opportunity to suck out funds like an infant that has got the breast as its only dependency to live after birth, their actions alone kill the masses more than you do, why then don't you just decide to visit them and leave the poor masses alone. Even without you been present they say to all you are, they temper and mess up the rate at which you work, they bring out figures that aren't aligned with the human brain, and this is the funny part Mr unseen killer, they forget all about what they do and yet they gather for campaigns and conferences, how funny those can be, they walk together clustered forgetting they set some rules and regulations to follow, on a norm they would have left the country for a better one but my goodness they couldn't because your presence at their desired destination is more alarming than their present location, why then don't you use their present location to dislocate them to the places you take all other people.

Covid-19 as you are called meaning you started in the year 2019, you are actually a year plus but don't think I will wish you a happy birthday or living, the entire 2020 was a state of pandemonium for all nations both the small and mighty, different measures, researches, and policies are been carried out just to find and get to the endpoint, all they all seek for is a solution, the end of 2020 must have been a bit celebrated because a vaccine to counter you were discovered after hundreds or thousands of research, they keep testing and waiting to see results, for some it did work and for some, it didn't, the test is still ongoing but many are afraid to get the vaccine, and it's not their fault, why say you have a vaccine for what you claim not to know it's the cause, no one wants to be test-run.

Hydroquinone has since been forgotten, as it was thought and said that if used can give a cure and bring an end to your mighty reign on earth.

The joy I have on the inside is the promising joy of God and that has been what has kept most of us going to date, we don't merit his grace but we have found solace in him and you know what it has become impossible for you to penetrate except God permits you, under the shadow of his wings we have been saved and saved forevermore. This has been my confidence, even though you are in my vicinity my dwelling is a no-go area for you, I am grateful for that privilege, and for many that enjoy it too, please stay safe and make use of your mask.

Remember nothing lasts forever, you are on the verge of ending. Adios Covid-19.