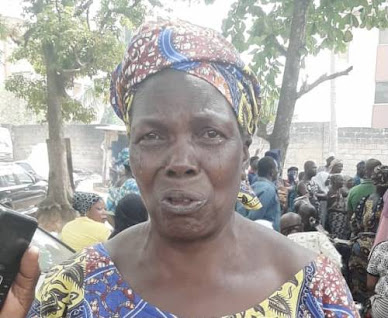 The Shasha incident in the Akinyele Local Government Area of Oyo State has left a lot of lives displaced, millions of properties burnt and source of livelihood shattered. One of the affected in the area Mrs. Elizabeth Funmilayo, who is a single mother lamented during an interview with members of the press that she had lost her life savings, and certificates of her children in the incident, the mother of four furthermore told the press she almost lost her aged mother who was indoors during the time of the crises, she claims if she hasn't rescued her mom early enough she would also have been burnt in the crisis.

she pleaded in tears to the public for help, "Please, help me. I don't have anything in life again. All my hope is on my children, but all their certificates have been burnt. All my live savings have gone. My clothes, properties, and even the little money I had have all gone.

"My aged mother was almost burnt with the house. I persuaded her before she followed me, thinking that the crisis would not lead to arson. We taught it was a joke but it later turned out to be massive destruction. I don't know where to start from."

Speaking on the genesis of the crisis, Funmilayo said, "I don't know how the crisis started but I heard it was between a Yoruba woman and a boy from the Niger Republic. Those people have domineering tendencies anywhere they are. They have been controlling this market for a long. I think that was one of the reasons that led to the crisis. But now, can the leadership tussle rebuild our houses and shops for us? No," she said.

She also faulted the lackadaisical attitude of the security agencies towards the crisis.

"Had it been that the police had done their part, the crisis wouldn't have degenerated to that level? We need help," she concluded