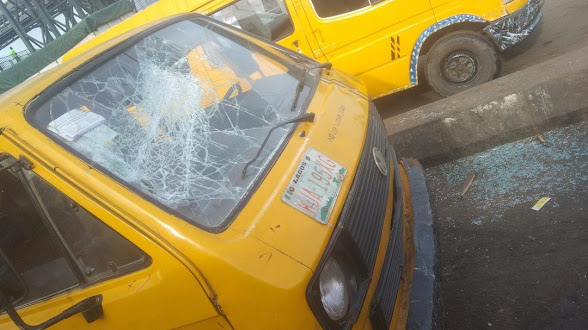 Many residents and passengers are currently stranded in Oshodi, Lagos State, as soldiers have taken over major places in the area.

Many residents and passengers are currently stranded in Oshodi, Lagos State, as soldiers have taken over major places in the area.

It was gathered that the military personnel stormed the area on Thursday morning to avenge the death of an officer of the Nigerian Air Force, who was allegedly mobbed to death by hoodlums.

Many vehicles, especially commercial buses have been destroyed, while some persons were assaulted by the aggrieved security operatives.

Some residents heading to work were trapped in the ensuing violence while students have fled back home.

Traders cleaning up their stores on the day of the weekly sanitation also fled just as some transporters abandoned their vehicles.

Soldiers targeting hoodlums are currently marching across the streets.

The situation has compounded the traffic woe in the cosmopolitan city as there is currently no movement in and out of the part of Oshodi where the rampaging soldiers are.

Oshodi links other major parts of Lagos and a major bus terminal is in that part of the state.

Muyiwa Adejobi, Police Public Relations Officer in the state, was not available for comments as of the time of filing this report as he neither responded to calls nor replied the text message sent.