NLC to meet with State Governors over proposed fuel price hikes to N408.5/Litre. 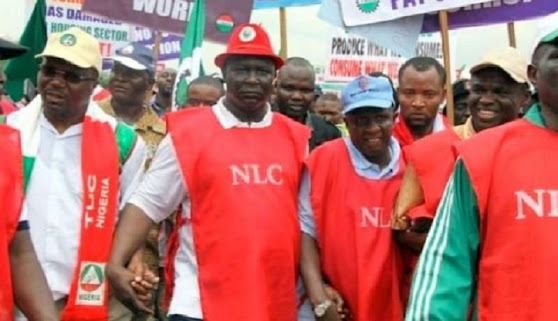 The Nigeria Labour Congress will today (Friday) come up with its position on the recommendation by governors that the price of Premium Motor Spirit, popularly called petrol, be raised from N162/litre to N408.5/litre.

A committee set up by the Nigeria Governor’s Forum had on Wednesday called for immediate removal of petrol subsidy. It recommended a petrol price of between and N380/litre and N408.5/litre.

Also, officials of the Nigerian National Petroleum Corporation told our correspondent that the oil firm was awaiting the Federal Government’s position on the recommendation of the governors before it would adjust the petrol price.

CLICK NOW TO HOST YOUR SITE FROM THE CHEAPEST WEB HOSTING PROVIDER!!!

NNPC has been the sole importer of petrol into Nigeria for more than three years running.

When contacted by PUNCH's correspondent on Thursday for the position of the NLC on the latest recommendation of the governors as touching petrol price, the Deputy President, Joe Ajaero, replied, “Congress will come up with a position latest tomorrow (Friday).”

Officials of both the NLC and the Nigeria Union of Petroleum and Natural Gas workers in separate exclusive interviews had last week argued that the continued imports of petrol by the NNPC was at the detriment of Nigeria’s refineries.

They also insisted that the government should fix Nigeria’s refineries and stop importing petrol to help halt subsidy and save funds for the country, as they opposed subsidy removal now.

Commenting on the matter, the President, ACCI, Dr Al-Mujtaba Abubakar, said in an interview that it would be painful to raise petrol price to N408/litre this time and called for gradual increment.

He said, “The subsidy removal can be staggered. They (government) can stagger it by either removing about 25 percent in the first three months, another 25 per cent next, and so on. They can stagger it.

“But as they remove the subsidy people will also want to see the benefits coming.”

Abubakar said the ACCI was in support of subsidy removal, but stressed that the amount saved must be properly channeled into infrastructure development.

On his part, the Director-General, LCCI, Dr. Muda Yusuf, explained that the inevitability of the deregulation of the petroleum downstream sector had not been in doubt.

He said given the huge financing gaps that existed at all levels of government, it was impossible to continue to sustain the subsidy regime, adding that the opportunity cost of petrol subsidy was huge.