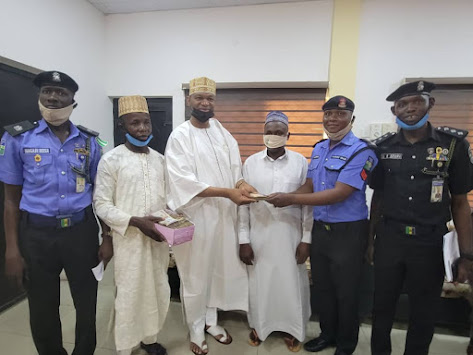 A police sergeant, Kabiru Isah of the Kano State Command’s Motor Traffic Division, recently returned a cash sum of N1.2m, which he found at an accident scene to the relatives of the deceased victim. He tells TUKUR MUNTARI the motivation behind his action, which has attracted wide commendation

What is your name and where are you from?

My name is Sergeant Kabiru Isah attached to the Central Motor Traffic Division, BUK Road, Kano. I hail from Borus in the Zuru Local Government Area of Kebbi State.

Are you married and do you have children?

Yes, I am married to one wife and I have a daughter.

When did you join the police?

What were you doing before you joined the police?

I was a researcher at the Junior Secondary School Danku Wasagu in Kebbi State.

What motivated you to join the police?

I was motivated to join the police because my father was a policeman, but he has since retired from the Force. I loved seeing him come back home in his police uniform and I even used to visit and stay with him in the (police) station.

ENJOY AFFORDABLE AND RELIABLE WEB HOSTING AT A CHEAPER RATE CLICK TO HOST!!

It was reported that you recently found a cash sum of N1.2m at an accident scene and took it to the victim’s family. Is it true and how did it happen?

Yes, it is true. When the accident happened we were asked to go to the scene. On getting to the accident scene, we took the victims to the hospital and then took the vehicles to the office. But, while conducting an analysis of the place (accident scene) I discovered the shoebox containing the money near the motorcycle of the deceased. I took it to the office from where it was later handed over to the relatives of the deceased.

What made you return the money rather than take it away?

As a Muslim and based on the teachings of Islam and my parents who always emphasize for me to be honest in whatever I do, I decided to take the money to the office from where it was handed over to the relatives of the deceased by our officer, OC Magaji Musa.  The amount handed over to them was N1,294,100.

Did you know how much the money was before you returned it?

No, honestly I didn’t know the exact amount contained in the shoebox until after I took it to the office and we counted it in the presence of the deceased’s relatives.

What was the reaction of the victim’s relatives when you returned the money?

They really expressed gratitude to us for returning their late brother’s money to them.

When you discovered the money, did you tell any of your colleagues about it before you got to the office?

Actually, I didn’t tell anyone until I reached the office because if I had announced it at the scene of the accident somebody could even beat me up in order to collect the money. So, that was why I kept quiet until after I reached the office. When I told my boss he thought the money was not much until it was brought out from the shoebox. My colleagues have actually commended me for what I did.

What was the reaction of your wife and children when they learnt that you found N1.2m and returned it to the victim’s family?

When I told my wife she expressed happiness and prayed for my success.

Was that the first time you would do something like this?

That was the first time I would find such a huge amount of money but I used to come across a number of lost items, including money which I always made sure I took to the office for an immediate return to their owners, families, or relatives of accident victims.

Have you ever regretted being a policeman?

I have never regretted working as a policeman. I even consider this as part of the achievements I recorded in the service.