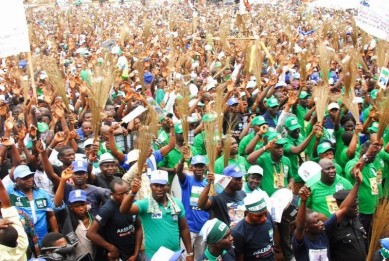 The Cross River State chapter of the All Progressives Congress (APC) has placed an order for three million bunches of brooms from local broom makers for the new members of the party.

Its state Publicity Secretary, Bassey Ita, disclosed this in a statement made available to journalists in Calabar on Monday, NAN reports.

It said that it was observed that the commodity, which is APC’s symbol, had suddenly become scarce in the state, following the influx of new members, in the wake of Governor Ben Ayade’s defection to the party from the Peoples Democratic Party (PDP).

”To address the challenge, the party ordered for three million bunches of brooms from local suppliers to meet the growing demand.

“It is no longer news that the broom revolution has since hit our dear state, following the defection of our amiable governor to our party.

“But what is now news is that broom scarcity has hit Cross River as millions of our people continue to identify with the party.

Meanwhile, some magistrates in the state have been protesting at the Governor's Office over their 26 months unpaid salaries.

The 29 magistrates recently manned the entrance of the Government House, Calabar, displaying placards with various inscriptions such as “Ayade stop oppressing Cross River Judiciary, pay us our salaries,” amongst other inscriptions.