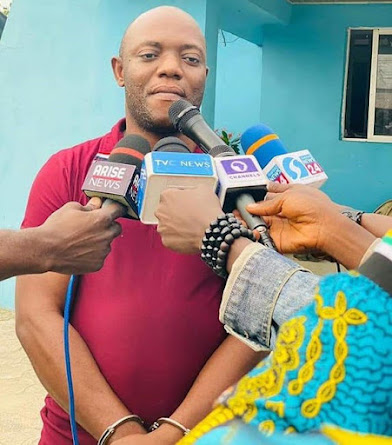 The suspect, Jimmy, who claimed to be a graduate of Psychology from the Delta State University, Abraka, was arrested at a popular private hospital identified as Tobis Hospital while trying to secure employment as a surgeon.

The state police commissioner, Mike Okoli, while parading the suspect before journalists at the State Police Headquarters in Yenagoa, said the imposter had been seeking employment from hospitals within Delta and Bayelsa states as a medical doctor.

Okoli, represented by the command's Public Relations Officer, SP Asinim Butswat, said there were several reported concerns about the suspect’s inability to use medical terminologies during test diagnosis as required of a medical doctor, thereby raising suspicion over his qualifications, which later led to his arrest.

BUY YOUR DOMAIN AND HOST YOUR WEB TODAY!!

The Permanent Secretary, Bayelsa State Ministry of Health, Dr. Wisdom Ebiye Sawyer, expressed the state government's resolve to deliver quality healthcare services to its citizens; hence it does not give any room for quackery in the state.

Also speaking, Chairman, Nigerian Medical Association (NMA), Bayelsa State branch, Dr. Ngowari Torunana, said upon the arrest of the suspect, the Medical and Dental Council of Nigeria confirmed that the suspect was an imposter.

The suspect, Jimmy, admitted that he was not the owner of the medical certificate in his possession and that he had been using a friend's certificate to seek a job as a medical doctor.

“I met the owner of the credentials on a bus while traveling to Abuja and we took some pictures. While transferring the picture to me, he also transferred the copies of his credentials. This is the first time I am using it,” he said.