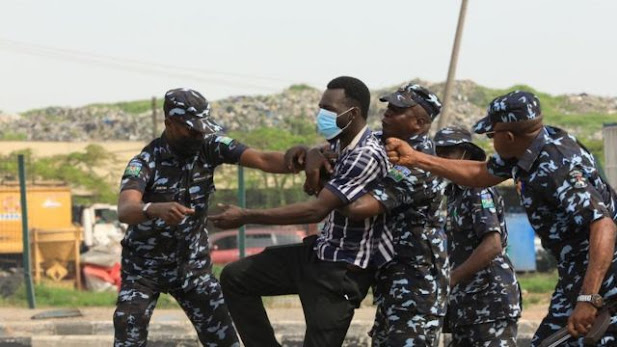 A journalist with an online newspaper, Legit.com, Samuel Olubiyo, has been arrested by armed policemen while covering the June 12 protest in Abuja.

SaharaReporters earlier reported that the police attacked protesters in the Gudu area of Abuja, dispersing them with tear gas canisters.

It was further learnt that the gun-wielding policemen stormed Gudu junction – the protest venue and arrested the journalist.

Samuel, upon his arrest, showed his identity card as a journalist, but the gun-toting policemen turned him down.

BUY YOUR DOMAIN AND HOST TODAY!!

The protesters, mostly youths, who took over the junction to protest against insecurity and bad governance were dispersed with tear gas canisters.

Many protesters sustained injuries while scampering for safety.

Efforts were made by other journalists who were on the ground as they pleaded on his behalf and identified him.

But the efforts were unsuccessful as the police insisted on taking him to their station for profiling to enable them to know his motive and intention in covering the protest.

As of the time of this report, the journalist has been taken to the Apo resettlement police station.